Winamp is a lean but powerful audioplayer program for Windows. One of its strengths is its extensibility through plugins. Integration with Avolites Titan has been around since the early days of Titan (I know for sure that you could use it with Titan v4, back in 2012 already).

For many years now, Winamp is being installed with Titan on all hardware consoles. It is available in the Tools menu under Additional Programs.

However, for the PC Suite (Titan Simulator, Titan One, T1, T2, Titan Mobile), Winamp needs to be downloaded and installed separately (http://www.winamp.com/).

For earlier Titan versions, a plugin was required for Winamp, in order to be controlled from Titan. This plugin was available at Avolites' Download page. After installing - or manually copying the gen_avolites.dll to Winamp's plugin folder - and restarting Winamp it was available in Winamp's preferences (hit Ctrl-P for preferences) as Avolites Virtual Fixture v2.0 under Plug-Ins/General Purpose. 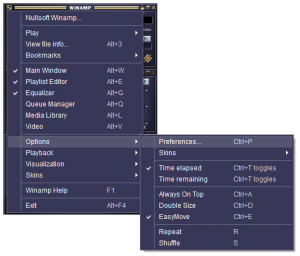 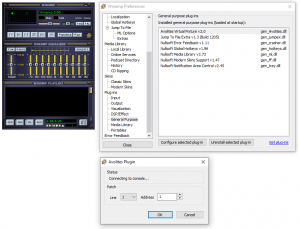 With Configure selected plug-In the virtual fixture could then be set to a specific DMX address and universe.

From Titan v.10 or so the plugin is not needed any more, and has subsequently disappeared from Avolites' website. Now, the required interface is always included in Titan, and Winamp can be patched without universe or address.

You can patch Winamp (manufacturer: Nullsoft) as like as a usual movinglight from Titan's Patch menu or Patch window. In earlier versions - with the plugin - universe and address needed to be set accordingly to the settings of the plugin. There was a limitation so that the plugin could only handle addresses up to universe 8. However, nowadays Winamp doesn't require a valid address anymore - just patch the fixture as parked, to have the controls available (in fact it automatically patches as parked). Yet, see below for other current issues. 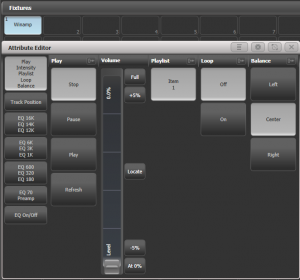 Patching Winamp in Titan gives some basic controls: you can select the track, start/stop/pause, as well as set the volume and the equalizer. In order to select a track it is recommended to put all tracks you gonna use into one playlist.

While patching Winamp lets you control Winamp from Titan, there is also the other way 'round: Winamp can send its timing information back into Titan, and hence can be set as Timecode source in the timecode menu, in order to run cuelists synced to music. This is available regardless if Winamp is patched or not - but see below why it is recommended to patch Winamp anyway!

Simply select Winamp as timecode source, and see the time changing as the track plays in Winamp. 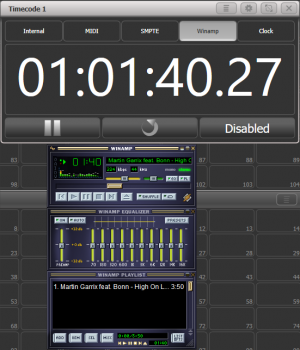 There are two things which are special to this scenario: Winamp timecode splits each second into 100 frames while other timecode usually runs on other framerates, and: the hour nibble - the leftmost two digits of the timestamp - denote the track number in the playlist. In the screenshot above there was only one track in the list - hence, the current timecode reads 01:01:40.27: track 1, at 01:40 min:sec and 27 frames.

Not only is Winamp a valid timecode source, also some transport control is available from the timecode menu and timecode window if Winamp is selected as timecode source: play, pause, and reset work as you might expect. And reset always returns to the timestamp which is set as Start Time in the timecode menu. This is a great help while programming and rehearsing: punch in the track and time at which you want to repeat the take. 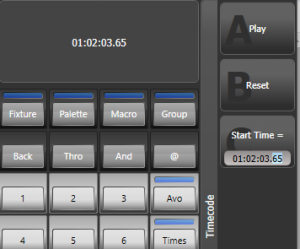 There are some little issues to be aware of: